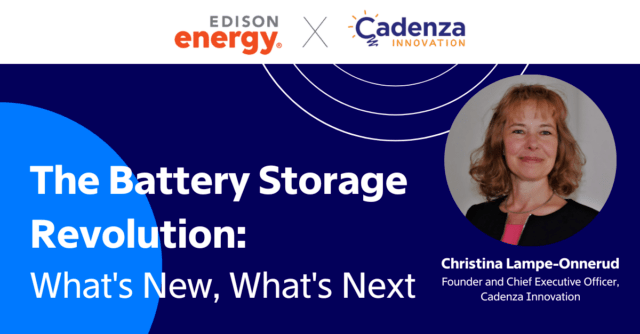 Edison Energy recently sat down with Dr. Christina Lampe-Onnerud, Founder and Chief Executive Officer at Cadenza Innovation, a provider of patented, safe, low-cost, high-performance, lithium-ion-based batteries and energy storage solutions for the utility, EV, and commercial and industrial (C&I) sectors. Cadenza currently licenses part of its technology to global manufacturers and will soon expand company efforts into manufacturing activities. Lampe-Onnerud, who also currently serves on the Board of Directors at the New York Battery and Energy Storage Technology (NY-BEST™) Consortium, is widely acknowledged in the global energy storage industry for her innovative and technologically pioneering work.

Previously, she was the Founder, CEO, and International Chairman of battery cell, pack, and system provider Boston-Power and served as a principal at the Arthur D. Little consulting firm, where she ran one of the world’s largest independent testing laboratories. Lampe-Onnerud, who currently sits on MIT’s Chemistry Department Visiting Committee, has twice been recognized as a World Economic Forum Technology Pioneer. In April, she was selected for the King’s Medal – one of Sweden’s most prestigious awards – for her outstanding contributions to Swedish business. Most recently, Cadenza was named “Innovator of the Month” by U.S. Sen. Chris Murphy (D-Conn.), who lauded the company for “leading the way in safe, low-cost clean energy storage.”

Last year, lithium-ion battery provider Cadenza Innovation announced that it was developing a customer cloud portal to manage deployed distributed energy resources, an end-to-end battery manufacturing execution system, and equipment automation to support the expansion of its battery manufacturing in the U.S. and abroad.

Partnering with Rockwell Automation on the initiative, Cadenza aims to create a full digital thread that feeds information from business systems to the factory floor and subsequently out to deployed energy storage systems to close the loop by feeding data from the field back into its connected operations. The technology is expected to ensure peak performance of customer systems.

“We have emerged as not just the provider of multiple hardware solutions where you have Lego blocks that can be fit together, but we have also added a software platform,” said Lampe-Onnerud. “In addition to having battery technology that is always starting from no explosions, no fires, and is easy to install, now we’re adding U.S.-based software infrastructure. We have batteries that can be placed anywhere, and they can talk to each other. The benefit of being a hardware provider with a software platform is we make sure the storage signals are sent to the batteries. But more interestingly, we are empowering a whole new era of how to think about electricity.”

Last month, the New York Power Authority announced that it had received an Innovation Icon award from Cloud for Utilities for a first-of-its-kind battery storage system, which is expected to serve as a model for commercial buildings looking for safer, lower-cost energy storage solutions. The pilot program spotlights Cadenza Innovation’s superCell lithium-ion battery technology to showcase the role that energy storage can serve in enhancing demand management and grid flexibility while helping to advance New York State’s climate and clean energy goals.

“We’re transforming into batteries being placed everywhere,” Lampe-Onnerud said. “When you make them small enough and safe enough, you can put some in the attic, some on every floor, some in the basement. They can take up a few parking spots, or maybe you put some in the back of your building. You connect them all in, and all of a sudden you have a very large battery that is not a big ugly battery – and you have the space for it. With our software platform, you tie them all together.”

The global lithium-ion battery market was valued at nearly $42 billion in 2021 and is projected to see an annual growth of more than 18 percent between 2022 and 2030.
In the U.S., increasing sales of electric vehicles, coupled with the presence of major market players, is expected to drive further demand for lithium-ion batteries.

“Batteries are the perfect arbitrage for electricity when we’re going through this energy transition,” Lampe-Onnerud said.

Increasing support for holding carbon emitters financially accountable has helped fuel battery growth. Carbon pricing curbs greenhouse gas (GHG) emissions by placing a fee on emitting and/or offering an incentive for emitting less. It also creates a price signal that reduces, or regulates, GHG emissions and at the same time provides a strong financial case for shifting investments away from fossil fuels to cleaner technology.

“There is general agreement and it’s coming to capital markets,” Lampe-Onnerud said. “So how exactly are you going to measure CO2, and how are you going to report it? Unclear, but there’s no question you have to. We’re heading this way and that’s a big sweeping global change.”

That change becomes even more dramatic when considering energy demand in the U.S., which is projected to double by 2030.

“In almost every jurisdiction, the need for electricity is so high,” Lampe-Onnerud said. “In fact, it’s so much higher than anyone forecasted. Where is this electricity going? Cellphones, data in general. All the energy for these data centers, and cryptocurrency – we need to think about that differently. That, in combination with climate change, makes the planet hotter. We’re not talking about the more prevalent fires or heat-adjusted nature aspects – we just say it’s a one-off. But it’s not a one-off. We don’t talk about climate migration as a climate migration. And we don’t even talk about whether that’s right or wrong.”

As the need for a robust battery supply chain increases, nations are vying to dominate the space, with all eyes on China. As the top global producer of solar energy, China accounted for 46 percent of new generating capacity added in 2021. It also just eclipsed other nations to become the world leader in wind power.

Now, China is eyeing the top spot for battery storage.

“China is the predominant nation manufacturer of solar and wind today,” Lampe-Onnerud said. “And they are pretty eager to become the number one nation in the manufacturing of batteries. If we don’t have a manufacturing arm, we will just continue to send great ideas across the ocean. We need to create an ecosystem. I hold no opinion about where the energy hub should be located, but I am very firm that more hubs are better than one hub. And the U.S. has an opportunity to be one of many hubs, and the more diversified the portfolio is, the more resilient we will be in response. We could be a battery nation. We have a huge opportunity to be leaders.”

To help get that done and as a champion for U.S. competitiveness, Lampe-Onnerud recently joined Li-Bridge, a public-private alliance committed to accelerating the development of a robust and secure domestic supply chain for lithium-based batteries.

“I think there is a lot of money to be made, which is easier to make if policy is easy to understand and implement,” Lampe-Onnerud said. “And it has to pay a lot of attention to the capital markets because without capital, it doesn’t matter. We need sponsorship on what to pick, how it works, how to connect it. We need a convening leadership group across policy, politics, business, education, and all of the social causes. We’re thinking through how the U.S. should play in this field of battery technology – and lithium-ion batteries specifically – which will be critical.”

Seeing her role at DOE as a call to action, Lampe-Onnerud notes that the U.S. must take immediate advantage of the opportunities the burgeoning battery sector presents.

“Taking it” will mean robust engagement, along with point-of-use policies that are both long-term and technology-agnostic. It will also require new, innovative ideas, like incentivizing the locations where batteries are installed to create more willing customers.

“It’s very bad when the government picks winners and losers,” Lampe-Onnerud said. “Most of the time, solicitations are so cumbersome because we have gotten so nervous about funding the wrong party. The deadlines are too short, and the applications are a lot of work. That’s meant for big companies and those are the only ones that can apply. We must lower the barriers. There’s a lot of capital in the U.S. and that means an enormous growth opportunity if we take it. It will empower a whole new era. None of us can do it alone – we’ve got to do it together. There will not be one winner, not one person, not one company, not one investor. It’s going to take quite a few of us.”

Cadenza Innovation Consolidates In Danbury, With Plans To Expand